Jazz Pharmaceuticals has signed a definitive agreement for the acquisition of Redx Pharma's pan-RAF inhibitor program for the potential treatment of RAF and RAS mutant tumors.

Redx will perform certain pre-clinical activities for the program under a separate collaboration agreement with Jazz.  Jazz will be responsible for further development, regulatory activities and commercialisation.

Under the terms of the agreement, Jazz will pay Redx an upfront payment of $3.5 million.  Redx is eligible to receive up to $203 million in development, regulatory and commercial milestone payments from Jazz, and incremental tiered royalties in mid-single digit percentage, based on any future net sales.

“We are excited to acquire Redx’s pan-RAF inhibitor program.  It has the potential to work in RAF driven tumors where current selective B-RAF inhibitors and their respective combinations are ineffective due to acquired resistance mechanisms.  In addition, there is the potential to address RAS driven tumors,” said Robert Iannone, M.D., M.S.C.E., executive vice president, research and development of Jazz Pharmaceuticals.

“We look forward to advancing the pan-RAF inhibitor program that is part of a novel class of next generation precision oncology drugs and is highly complementary to our growing R&D portfolio of early-stage, innovative, hematology/oncology therapies.”

Mutations leading to uncontrolled signalling via the RAS-RAF-MAPK pathway are seen in more than one third of all cancers.  The pan-RAF inhibitor program aims to overcome resistance mechanisms associated with clinically approved B-RAF selective drugs.

The RAF kinases (A-RAF, B-RAF and C-RAF) are an integral part of this pathway, with B-RAF mutations commonly seen in the clinic.  Although most B-RAF V600E mutant skin cancers are sensitive to approved B-RAF selective drugs, B-RAF V600E mutant colorectal cancers are surprisingly insensitive to these agents as monotherapy due to the functions of other RAF family members and require combination therapy.

Pre-clinical study results of Redx’s pan-RAF program have demonstrated in vivo efficacy in a B-RAFV600E mutant colorectal cancer xenograft model as a single agent, where approved B-RAF selective drugs are ineffective as monotherapy.  It has also shown promising activity in RAS-mutated cancer cells. 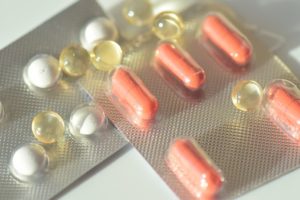