Merck announced the presentation of results of a phase 3 trial evaluating the efficacy and safety of BELSOMRA (suvorexant) C-IV for the treatment of insomnia in people with mild-to-moderate Alzheimer’s disease dementia.

This is the first dedicated Phase 3 polysomnography study of an insomnia medication in people with mild-to-moderate Alzheimer’s disease dementia, and in the trial, BELSOMRA met its primary and secondary efficacy endpoints. For the primary endpoint, 4-weeks of treatment with BELSOMRA improved mean total sleep time (TST) by 28.2 minutes versus placebo (n=135 vs. n=139, respectively; [95% CI:11.1,45.2], p<0.005).

“Insomnia and other sleep disturbances are more common in people with Alzheimer’s disease dementia, but evidence for the efficacy and safety of sleep medications in this population remains limited,” said Dr. W. Joseph Herring, associate vice president, Global Clinical Research, Neuroscience, Merck Research Laboratories. “We are encouraged by the efficacy and safety results of BELSOMRA in those living with Alzheimer’s disease dementia. Merck plans to file these data with the U.S. Food and Drug Administration for potential inclusion into the BELSOMRA prescribing information.”

BELSOMRA (suvorexant) C-IV 5 mg, 10 mg, 15 mg and 20 mg tablets are currently approved in the United States for treatment of insomnia characterized by difficulties with sleep onset and sleep maintenance.

The Phase 3 randomized, double-blind, clinical trial evaluated the efficacy and safety of BELSOMRA (suvorexant) 10 mg, which could be increased to a 20 mg dose based on clinical response (77% of patients treated with BELSOMRA increased their dose from 10 mg to 20 mg after the second week of study) or matching placebo in participants with mild-to-moderate Alzheimer’s disease dementia (a score of 12-26 on the Mini Mental State Examination) and insomnia (mean total sleep time less than 6 hours). Sleep was measured by overnight polysomnography in a sleep laboratory. The trial consisted of a 3-week screening period with a 2-week single blind placebo run in followed by a 4-week double blind randomized treatment period.

Overnight polysomnography in a sleep laboratory was performed during a visit 14 days prior to randomization, at a baseline visit 7 days prior to randomization and following the 4-week double-blind treatment period. The primary endpoint of the study was change-from-baseline in polysomnography-measured mean TST in minutes (higher score indicating improved sleep) at Week 4.

Safety was assessed by adverse event reports, laboratory analyses, electrocardiograms and physical examinations performed as stated in the protocol. Adverse events were recorded in 22.5% (n=32/142) of patients in the BELSOMRA group and 16.1% (n=23/143) in the placebo group. One patient in each group discontinued treatment due to an adverse event. The most common recorded adverse event was somnolence (drowsiness), which was reported in 4.2% (n=6) of patients in the BELSOMRA-treated group and 1.4% (n=2) of placebo-treated patients. Somnolence was recorded as mild-to-moderate severity. Other adverse events included: headache (n=5 on BELSOMRA vs. n=6 on placebo), dry mouth (n=3 vs. n=1) and falls (n=3 vs. n=0).

Findings indicate that insomnia affects up to 45% of people living with Alzheimer’s disease. Many factors contribute to insomnia, which evidence suggests includes when wake-promoting signaling overrides sleep-promoting signaling in the brain. There are many neurotransmitters in the brain that regulate wakefulness, including the orexin signaling system. Elevated orexin levels in cerebral spinal fluid are found in those living with Alzheimer’s disease.

Changes occurring in the brain tissue of people with Alzheimer’s disease are associated with the loss of mental abilities and are also believed to cause disruptions in the sleep/wake cycle resulting in sleep problems. Many people with Alzheimer’s disease wake up more often and stay awake longer than those without the disease, which may lead to significant shifts in sleep/wake pattern 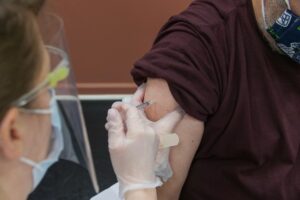