Shire head of research and development and chief scientific officer Andreas Busch said: “The approval in Europe for VEYVONDI marks a key milestone in our efforts to tackle unmet medical needs for those living with von Willebrand disease.

“We are excited to take the next steps in ensuring that VEYVONDI is widely available across Europe to address the individual needs of those affected by the condition and in need of factor replacement.”

The Marketing Authorization is based on outcomes from three clinical trials of a total 80 patients with VWD exposed to VEYVONDI.

These include a Phase 1 multicenter, controlled, randomized, single-blind, dose-escalation study of the safety, tolerability and pharmacokinectics (PK) of rVWF:rFVIII in subjects 18 to 60 years of age with severe VWD; a Phase 3 multicenter, open-label study to assess the PK, safety and efficacy of rVWF:rFVIII and rVWF in the treatment of bleeding episodes in adult subjects with severe VWD; and a Phase 3, prospective, open-label, uncontrolled, non-randomized, international multicenter study to assess the hemostatic efficacy and safety of rVWF with or without rFVIII in 15 adult subjects with severe VWD undergoing major, minor, or oral elective surgical procedures.

VWD is the most common inherited bleeding disorder, affecting up to 1 percent of the global population or approximately 100,000 people in the EU. VWD is caused by a deficiency or dysfunction of VWF, one of several types of proteins in the blood that are needed to facilitate proper blood clotting. Only a minor proportion of affected individuals have the severe form of the disease and are in need of VWF replacement.6 Symptoms range from nosebleeds to bleeding from the gums and easy bruising. Bleeding from the stomach and intestines can occur but is less common.7

With this approval, Shire is now authorized to market VEYVONDI in the 28 Member States of the European Union (EU), as well as in Iceland, Lichtenstein and Norway.

VWD is the most common inherited bleeding disorder, affecting up to 1 percent of the global population. VWD is caused by a deficiency or dysfunction of VWF, one of several types of proteins in the blood that are needed to facilitate proper blood clotting. Due to this deficiency or dysfunction in VWF, blood is not able to clot effectively in people with VWD. The majority of cases (70-80%) are due to partial quantitative VWF deficiency (Type 1 VWD). The most severe form of VWD (severe Type 3 VWD) is the least common, with incidence varying by ethnicity from 0.1 to 5.3 cases per million. The mutation may occur spontaneously with no previous family history. Bleeding caused by VWD is unpredictable and its severity varies greatly among patients with this disease. 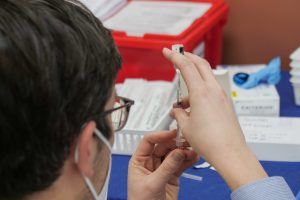