Starpharma and Mundipharma have signed a licence agreement for the sales and marketing rights to VivaGel BV for 43 countries in Europe, Russia, the Commonwealth of Independent States (CIS) and the balance of countries in Latin America.

This deal builds on the VivaGel® BV licence signed with Mundipharma in May 2018 for Asia, the Middle East, Africa and parts of Latin America.

The European region is an important addition to the territories already under licence with Mundipharma. Europe represents a large commercial opportunity for VivaGel® BV, enabling access to more than 260 million women.

Coupled with the European Union (EU) regulatory approval already in place, this licence is expected to provide a rapid timeline for product launch. Mundipharma will proceed to launch the product under its BETADINE® brand as soon as practicable with first launches targeted for early 2019.

Consistent with the previous Mundipharma deal, Starpharma will receive returns via a revenue share on VivaGel® BV sales and is also eligible to receive signing, launch and other commercial milestones. Under the European deal, eligible milestones total up to

A$20.9 million (US$15.5 million), including a A$2.0 million (US$1.5 million) upfront payment. The combination of territories now under licence with Mundipharma means Starpharma is eligible to receive total signing, regulatory and commercial milestones of up to A$33.3 million (US$24.7 million), in addition to receiving revenue share.

The term of this licence is 15 years and contains commercial performance obligations, including minimum annual purchases by Mundipharma. Mundipharma is responsible for marketing, promotion and sales of the product in its licensed territories.

Starpharma retains ownership of the VivaGel® BV trademark and will supply Mundipharma with VivaGel® BV. Other commercial terms of the agreement remain confidential.

Commenting on the licence, Dr Jackie Fairley, CEO of Starpharma said: “We are delighted to expand our commercial relationship with Mundipharma, owners of the rapidly growing feminine care brand, BETADINE.

“In particular, Europe represents a very important market for VivaGel® BV and with this licence in place, VivaGel® BV will soon be available to millions of European women who suffer from BV. We’re impressed by Mundipharma’s commitment to the feminine care category and their plans to expedite the product launch through their extensive marketing network in Europe”.

Raman Singh, Mundipharma CEO, commented: “We’re excited to be working with Starpharma in an area of significant unmet need and to be adding this highly innovative product, VivaGel® BV, to our BETADINE® feminine care range throughout additional regions, including Europe.”

The signing of this licence for Europe is the culmination of a competitive process undertaken by Starpharma involving multiple leading pharmaceutical and women’s health companies.

Significant weighting was applied to commercial terms, each company’s marketing and sales capabilities, as well as their planned time to market.

Starpharma is also in advanced commercial negotiations for marketing rights to VivaGel® BV in North America and expects to announce further licensing arrangements in the near future. Starpharma lodged its New Drug Application (NDA) with the US FDA under a Fast Track designation in April 2018. 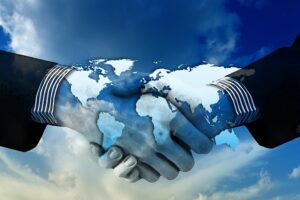