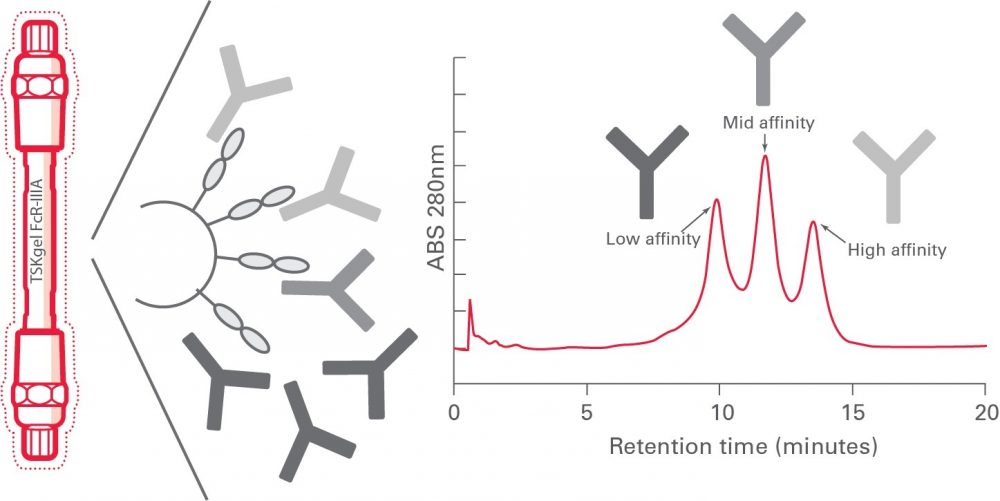 Tosoh Bioscience GmbH, a provider of chromatographic solutions for the separation of biomolecules, announced today the introduction of its TSKgel FcR-IIIA-5PW HPLC column. This column is the second in the FcRγaffinity chromatography portfolio for antibody drug analysis developed independently by Tosoh Corporation.

The TSKgel FcR-IIIA-5PW is a semi-preparative affinity column based on a recombinant FcγRIIIA receptor ligand bonded to porous 10µm polymethacrylate particles. The column can be loaded with up to 5mg of monoclonal antibody (mAb), allowing material collection in sufficient quantity for in-depth analysis.

Both TSKgel FcR-IIIA columns, the FcR-IIIA-5PW and FcR-IIIA-NPR, separate antibodies based on the affinity of their Fc region for a particular Fc receptor (FcγIIIa) into three fractions. These fractions correlate with different mAb glycoforms and their antibody-dependent cellular cytotoxicity (ADCC) activity. Thus the columns represent a tool to rapidly link FcγIIIa receptor affinity with mAb function and structure. Characterizing each of the fractions with orthogonal methods allows for linking FcγIIIa receptor affinity to structural causes and functional effects. For this purpose, a workflow was established to determine the glycosylation pattern in different affinity fractions with HILIC-MS.