AstraZeneca has temporarily stopped worldwide trials of its investigational AZD1222 vaccine for Covid-19 following an unexplained event of a participant falling sick.

AZD1222, which is currently in phase 3 trials, has been seen as one of the most promising vaccine candidates across the world that is likely to be approved for the prevention of Covid-19.

The vaccine candidate raised hopes after AstraZeneca in July said that it showed strong immune responses against the SARS-CoV-2 virus in all participants in a phase I/II trial.

The recombinant adenovirus vaccine was licensed by the pharma major from Oxford University in May 2020.

AstraZeneca said that all the trials of the investigational vaccine have been paused as part of a standard response to the unexplained incident. The company said that although illness in large trials could happen by chance, the event will still be probed to see if the vaccine candidate had caused any side effect.

The late-stage trials of AZD1222 are anticipated to have up to 50,000 participants across the world. Among these is a phase 3 trial of the Covid-19 vaccine candidate in the US, which was launched in late August, and expected to see the participation of up to 30,000 adults aged 18 years or over.

A company spokeswoman has been quoted by various media publications, as saying” “As part of the ongoing randomized, controlled global trials of the Oxford coronavirus vaccine, our standard review process was triggered and we voluntarily paused vaccination to allow review of safety data by an independent committee.

“This is a routine action which has to happen whenever there is a potentially unexplained illness in one of the trials, while it is investigated, ensuring we maintain the integrity of the trials.”

Although the nature of the illness was not revealed, the participant is likely to recover from it, reported Stat News, which brought up the news about the trials’ suspension caused by a “suspected serious adverse reaction”.

Meanwhile, New York Times citing a person familiar with the matter, reported that the participant in question is based in the UK. The person was found to have an inflammatory syndrome called transverse myelitis that impacts the spinal cord and is usually triggered by viral infections.

However, it is not clear if the illness in the UK participant has a direct link to the vaccine candidate, reported Reuters. 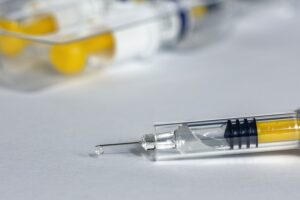