Omeros Corporation today announced that its Investigational New Drug Application (IND) to begin clinical trials with OMS906 has been cleared by the U.S. Food and Drug Administration (FDA).

FDA’s clearance of the IND allows the initiation of the clinical program for OMS906. A Phase 1, placebo-controlled, double-blind, single-ascending-dose and multiple-ascending-dose study will evaluate the safety, tolerability, pharmacodynamics and pharmacokinetics of OMS906 administered subcutaneously and intravenously to healthy subjects. Enrollment is planned to begin in early September. The trial will provide additional information regarding the anticipated OMS906 dosing regimen in patients, which is targeted for once monthly subcutaneous administration. Following adequate Phase 1 data collection and analysis, the initial Phase 2 clinical trial is planned in patients with life-threatening paroxysmal nocturnal hemoglobinuria (PNH), a rare disease characterized by red blood cell destruction, blood clots and impaired bone marrow function.

“FDA’s decision clears the way for us to begin clinical trials with OMS906,” stated Gregory A. Demopulos, M.D., chairman and chief executive officer of Omeros. “Based on its mechanism of action, we believe that OMS906 will demonstrate a better safety profile and/or more convenient dosing than other drugs on the market or in development for PNH. By inhibiting MASP-3, the key activator of the alternative pathway of complement, the potential indications for OMS906 are expansive. The therapeutic rationale for MASP-3 inhibition and OMS906 are sound, and we look forward to seeing what the drug will do in the clinic.”

MASP-3 is responsible for the conversion of pro-factor D to factor D. It is believed to be the premier target in the alternative pathway with the lowest native circulating level and low relative clearance compared to the other alternative pathway proteins. Also, unlike C5 and C3 blockers, MASP-3 inhibition leaves intact the lytic arm of the classical pathway, important for fighting infection. Omeros has created a broad intellectual property position directed to the use of MASP-3 inhibitors, including OMS906, for the treatment of a wide range of disorders related to dysfunction or excessive activation of the complement system’s alternative pathway. As part of its complement franchise, Omeros also broadly controls the inhibition of MASP-2, the effector enzyme of the lectin pathway of complement. A rolling biologics license application (BLA) for Omeros’ lead MASP-2 inhibitor narsoplimab in the treatment of hematopoietic stem cell transplant-associated thrombotic microangiopathy (HSCT-TMA) is targeted for completion this quarter. Narsoplimab is also in Phase 3 clinical programs for immunoglobulin A (IgA) nephropathy and atypical hemolytic uremic syndrome and is being advanced to treat critically ill patients with COVID-19. 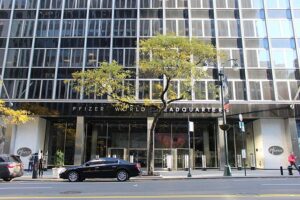